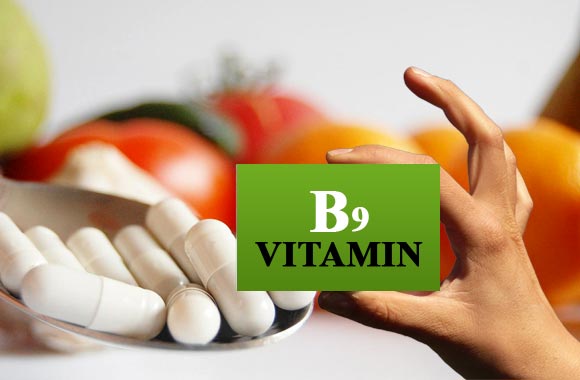 Folic acid, also known as Vitamin B9 has its various chemical names such as Folacin, Pteroylglutamic Acid, Folate, and Folinic Acid. Its old name was vitamin M. It is a yellow crystalline substance and is only slightly soluble in water. Folic acid is heat stable in neutral or alkaline media but not in acidic medium. Its structure has three components which are derivatives of pteridine, para-aminobenzoic acid, and glutamic acid.

This vitamin is widely distributed in nature. It is named folic acid because it occurs especially in the foliage of plants. It occurs in food in two forms either as free folate or bound folate. Its chief dietary sources are

It is also synthesized by the bacteria present in the intestine but this solely is not very significant. The total body folic acid which is 6-10mg, up to 60% is present in the liver.

Absorption of Folic Acid: Most absorption occurs in the proximal part of the small intestine, and the disease of this part of the gut is the most common cause of the folic acid deficiency. Folic acid taken as such is readily absorbed.

Excretion of Folic Acid: It is excreted in bile but is reabsorbed.

Folic acid is not active and for its activation, it has to be converted into tetrahydrofolate. Ascorbic acid appears to be essential for the reduction of folic acid to tetrahydrofolate. This tetrahydrofolate gives rise to several folic acid coenzymes because it can act as a carrier of various one carbon atom. These folic acid coenzymes are concerned with a large number of reactions in tissue cells; their participation in the synthesis of purines and thymine makes folic acid important in the growth and reproduction of the cells. So it plays role in the synthesis of nucleic acid which constitutes the chromosome and it is also needed for the normal development of the blood cells in the bone marrow. It is no wonder then that folic acid deficiency is manifested by abnormalities of tissues cells with a high mitosis rate such as the cells of the hematopoietic system and those lining the digestive tract.

Deficiency and Its Effects

Folic acid deficiency may occur from a poor diet. It is commonly found in pregnancy and lactation where requirements are increased.

Its daily requirement in an adult is 100 mcg per day.

There has been shown no evidence of folic acid excess use toxicity so far.