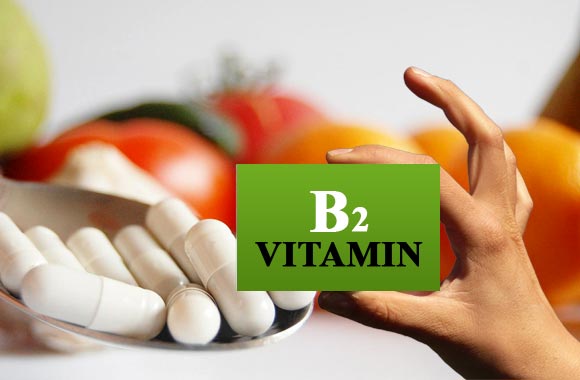 Vitamin B2 also called Riboflavin is a member of the B-group of the vitamins. It is orange-yellow crystalline compound and is water soluble. It is heat stable but sensitive to light forming lumiflavin.

This vitamin occurs either a free riboflavin or as constituents of flavoproteins which acts as enzymes. It is widely distributed in nature and present in all cells of plants and animals.

This vitamin is important for cellular oxidation. It is also essential for maintaining the integrity of the mucocutaneous structure. It is a cofactor in a number of enzymes involved with energy metabolism. It forms two coenzymes

Riboflavin deficiency is usually associated with a low intake of milk and animal proteins. Pasteurization of milk results in an appreciable loss of this vitamin. Ectodermal tissues such as skin, nervous system and eye are the most vulnerable to its lack. Clinically riboflavin deficiency is seen usually along with the deficiency of multiple factors such as in poorer population and in alcoholics. It is also seen in newborn infants subjected to phototherapy for hyperbilirubinemia. Breastfed infants are more liable to show deficiency because of lower riboflavin content of human milk. Its deficiency is also seen in patients on chronic peritoneal dialysis and hemodialysis. Following are the features that are seen within this deficiency.

There is a decreased activity of the FAD-containing enzyme glutathione reductase in the RBC’s. The urinary content of this riboflavin is also found to be low.

Riboflavin is absorbed from the upper gastrointestinal tract by a transport mechanism and is converted into FMN. 9% of it appears in the urine. It is synthesized by the bacteria present in the colon but this vitamin is not absorbed.

Riboflavin is not stored as such in the body. Its daily requirement is 0.6 mg per 1000 kcal of energy intake.

There is no such harmful effect seen in case of its excess use since it is not absorbed. Increase amount of riboflavin is excreted in urine if it’s taken in an excess amount.