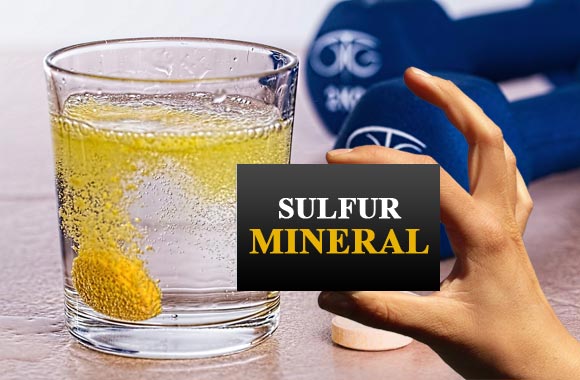 The sulfur mineral is present in all the cells of the body as a constituent of S-containing amino acids. Keratin is very rich in the S- containing amino acid cysteine. It is ingested in the form of proteins which are usually methionine and cysteine. The body does not use elemental sulfur or inorganic sulfates.

About 1 gram of sulfur is normally excreted in the urine every day. The sulfur in the urine occurs in the following forms:

Etheral sulfate: This fractions amount to 0.08 grams/day. It is represented by the sodium and potassium salts of sulfates of indoxyl, phenol, and cresol. The ethereal sulfates represent detoxification compounds of phenols and are formed in the liver.

Normally people get enough quantities of Sulfur from their foods or diets so chances of its deficiency are not that much. But in the case where it is really very deficient in one’s food following symptoms of its deficiency may arise; There occur some skin problems/disorders, nerve disorders, muscle pain,  circulatory trouble, inflammation, arthritis, constipation damages resulting from free radicals, infection, wrinkles and even stress.

There has been no known toxic effect is seen in case if sulfur is ingested in large amount. It will only lead to increasing methionine and cysteine contents.