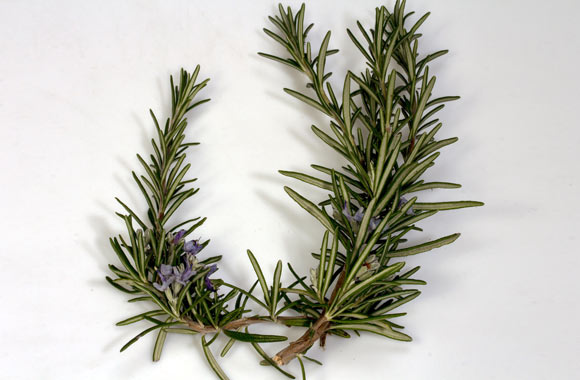 Rosemary looks like a small sprig from an evergreen tree and has a pine fragrance to the spring. The pungent flavor of rosemary goes a long way to help season these types of dishes and they are chicken, lamb, pork, salmon, and tuna dishes. Rosemary also helps soups and sauces with its pungent taste.

The herb, rosemary grows on a small evergreen shrub that belongs to the Labiatae family that is also related to the mint family. Its leaves look like flat pine tree needles which look deep green color on top while the underside is a silver-white color.

Quickly rinse the rosemary sprig off with cool running water and pat dry with a towel. Most recipes call for rosemary leaves, which can easily be removed from the stem or you can add the whole sprig of rosemary to season soups, stews, and meat dishes. Simply remove the rosemary sprig before serving the dish.

Fresh rosemary should be stored in the refrigerator in the original wrapping or in a slightly damp paper towel. You can also place the rosemary sprig in ice cube trays and cover with water or stock that can be added when preparing soups or stews. Dried rosemary should be kept in a tightly sealed container in a cool, dark, dry place where it will be kept fresh for about six months.

Rosemary contains substances that are useful for stimulating the immune system, increasing circulation, and improving the digestion of the human body. The herb also contains anti-inflammatory compounds that help it reduce the severity of an asthma attack and rosemary has been shown to increase the blood flow to the head and brain while improving the concentration of the human being.