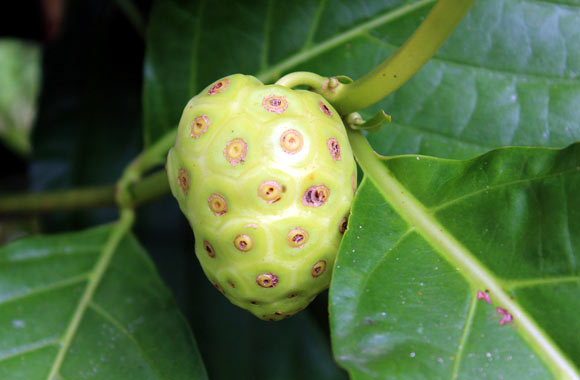 The Noni is indigenous to Southeast Asia and Australasia and is also known as Great Morinda, cheese fruit, Indian Mulberry or Beach Mulberry. The Latin name for the Noni is the Morinda Citrifolia.

The Noni fruit is a good source of carbohydrate, fiber, and proteins whilst being fat-free. The juice is high in Vitamin A, niacin and iron.

The fruit is said to be good for the skin and people with acne use the juice from the fruit to cure skin problems.  The juice of the Noni fruit is also said to prevent hair loss and a few, limited studies have shown the lost hair can be regenerated by using products containing the Noni fruit.

It is also believed that the Noni fruit has cancer-fighting abilities. Testing carried out in mice in labs have indicated that the juice prevents cancer cells from spreading and also slows down the growth of tumors over a period of time. As research is not yet complete, this information cannot be validated just yet. Medical research has proven that Noni juice decreases the cholesterol levels in humans.

The Noni fruit is very much a part of the Polynesian culture and medicine and it has been used for many centuries as:

An immune booster, many of its nutrients are known as stimulants to the immune system.

A digestive stimulant, as it is useful as a laxative.

Analgesic, as it has been found that the fruit is almost 75 percent as effective as morphine sulfate in relieving pain and has no side effects. The tree is known as the “Painkiller or Headache” tree.

The antibacterial, antifungal and antiparasitic effects of the fruit are due to the active compounds like anthraquinones, scopoletin, and terpenes, making the Noni extremely effective against bacteria and fungus.

Some research has shown that extracts of the Noni fruit contain a component that activates serotonin receptors in the brain. Serotonin, a neurotransmitter plays a significant role in temperature regulation, sleep, hunger and sexual behavior. A deficiency of serotonin gives rise to a number of pathological conditions including migraine headaches, depression, and Alzheimer’s disease. To counter these conditions, synthetic drugs are used but these also have adverse effects whereas the Noni fruit provides the same benefit with no side effects.

For those affected by diabetes, studies carried out on animals have shown the Noni fruit to treat diabetes normalizing blood sugar levels similar to the drugs prescribed for the condition. The research also concluded that there was less damage to the liver and fatty deposits in the liver were also significantly low.