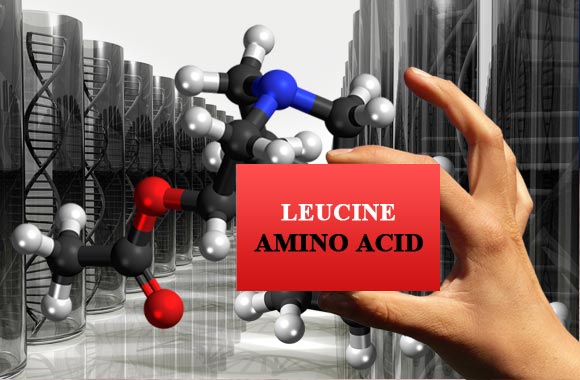 Leucine is the branched-chain amino acid with a non-polar aliphatic side chain. It is an essential amino acid as it cannot be synthesized by the body. So it must be obtained from the foods or diets. It has UUG, UUA, CUC, CUU and CUG codons. Leucine is a ketogenic amino acid.

It is found in foods containing proteins. Its sources are:

Since leucine is not formed in our body but it is synthesized in the plants and some microorganism. In them, it is formed from pyruvate by using following enzymes namely, acetolactate synthatase, dihydroxyacid dehydratase, acetohydroxy acid isomeroreductase, isopropylmalate isomerase and synthase along with leucine aminotransferase.

In the human body, it has been found to be a major component of buffer proteins, austacin, and ferritin.

– An excess intake of leucine results in the development of pellagra which is characterized by 3 D’s namely, Dermatitis, diarrhea, and death.

– Its high intake has also been found to damage the liver and kidney functions as a result of increased production of ammonia.

– A disease known as branched chain ketoaciduria or maple syrup urine disease has been found due to the failure of metabolism of three amino acids which are leucine, isoleucine, and valine. The failure occurs due to the deficiency of an enzyme branched chain keto acid dehydrogenase that is responsible for decarboxylation of these three amino acids. This disease is characterized by dehydration, vomiting, feeding problems in the baby and metabolic acidosis. There is a characteristic maple syrup odor in the urine, hence named maple syrup urine disease. If it is not treated, it will lead to mental retardation, physical disability, and even the death.

In a nutshell, leucine is an important amino acid. It is also available in the form of supplements in the market. These supplements can be taken with valine and isoleucine for better results.