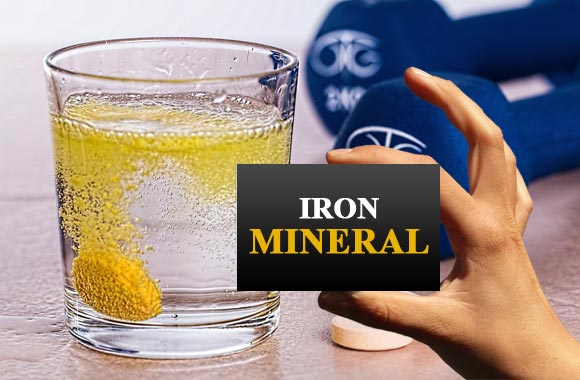 The iron mineral is the part of the structure of many important body constituents e.g. hemoglobin, myoglobin, enzymes like cytochromes, catalases, xanthine oxidase, mitochondrial glycerophosphate oxidase etc. The iron content of hemoglobin is 0.34%. The adult human being contains about 2-4gtam of iron of which 60-70% is present in the blood as circulating iron and the rest as storage iron. Recommended daily intake of iron in adults in 0.9 mg

There are two forms of irons

Cooking in iron utensils increases the iron content of foods. Food which decreases iron absorptions is milk, eggs, and tea.

Iron is necessary for many functions in the body including formation of hemoglobin, brain development and function regulation of body temperature, muscle activity, and catecholamine metabolism. It is important for our immune system also. Lack of it directly affects the immune system; it diminished the number of T-cells and the production of antibodies. Beside hemoglobin, iron is component of myoglobin, the cytochromes, catalase, and certain other enzyme systems. Iron is essential for binding oxygen to the blood cells. The central function of iron is oxygen transport and cell respiration.

The total daily iron loss of an adult is probably 1mg and about 2 mg in menstruating women. Major routes of iron loss are

Hemorrhage:  The cause of which may be psychological or pathological.

Basal Losses: These include excretion through urine, sweat, bile and desquamated surface cells. The recent use of an intrauterine device is also an additional cause of iron loss.

There are three stages of iron deficiency which have been categorized.

This is of hypochromic, microcytic type and is the most common type of anemia being especially present in women of childbearing age and infants below 1 year of age.

Increase in iron levels in the body results in a condition called hemosiderosis and it is seen in some people who eat food cooked in iron utensils.