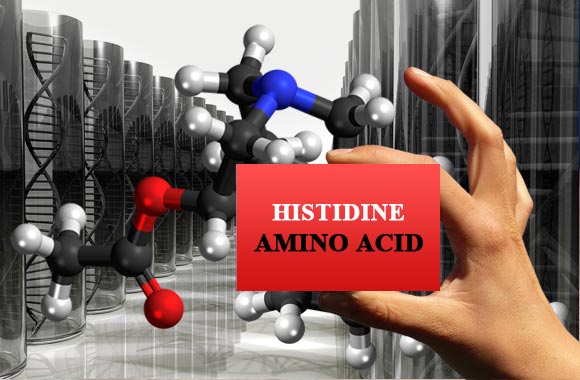 Histidine is the glucogenic amino acid with a basic side chain. It is a weak base. After being incorporated in a protein molecule, histidine may show either a positively charged or negatively charges side chains which are determined by the ionic environment provided by the proteins. Histidine is an essential amino acid which needs to be provided by the food to our body. It is present in the DNA. It is proteinogenic amino acid and. CAC and CAU are its codons. Histidine contains imidazole functional group which makes it a participant in an enzyme-catalyzed reaction.

Following are the histidine sources:

Plant sources: Rice, rye, and wheat are some of the plant sources of histidine amino acid.

It is produced in the body as a result of a breakdown of muscle protein. Histamine is also released by chemical and mechanical stimuli in our bodily. Some of the drugs also result in the release of histamine. It is also released by tissue injury and burns.

Histidine is the precursor of a very important amine called “histamine” which is formed by its decarboxylation in the presence of enzyme histidine decarboxylase. In the body, histamine performs a number of functions. Histamine has four receptors in the body. These are H1, H2, H3, and H4. Some of its functions are as follow.

The histaminergic neurons are present in the posterior hypothalamus whose axons project to all areas of the brain. These neurons seem to play role in pain threshold, arousal, sexual behavior, blood pressure and regulation of drinking. It has been seen that they also play role in the regulation of secretion of several anterior pituitary hormones.

Histidine is important for growth and repair of the tissues and also in the maintaining myelin sheath functional. Histidine also plays role in the synthesis of both the red blood cells and white blood cells. Histidine is very important in infants and its deficiency in them leads to eczema which is a form of dermatitis.

Histidine supplements are also available in the market these days.