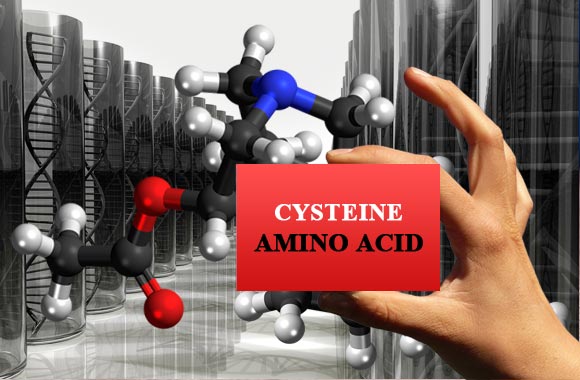 Cysteine is an uncharged amino acid with polar side chain and hydrophobic in nature. It is sulfur-containing amino acid and S atom in cysteine is its functional group. It is also glucogenic that it only produces glucose. It is one of the non- essential amino acids which are synthesized in the body. UGU and UGC is its codon.

Cysteine is present in the high protein food which includes

It is needed for all ages especially in peoples with certain metabolic diseases or due to malabsorption syndromes.

Cysteine is needed for the skin and it performs detoxification action in the body as it is present in keratin which is the main protein found in the nails, hairs, and skin.

It is essential for collagen synthesis as well as provides texture and elasticity to the skin.

It also forms another amino acid the taurine.

It acts as a precursor to glutathione which is an antioxidant. It, therefore, detoxifies the body from the free radical produced in the body which damages the cell membrane and DNA. The presence of these free radicals also results in a number of diseases like heart diseases or even cancers. So there needs to be eliminated which is done by cysteine.

It also has a role in the metabolism of a certain chemical found in the body, for example, heparin, biotin, coenzyme A, glutathione and lipoic acids etc.

These days cysteine supplements are available in the market in the form of N-acetylcysteine NAC. Benefits of its use are that it detoxifies harmful substance in the body and performs liver protecting actions. It also has used in cough drugs where it functions to break the disulfide bone and thins the thick mucus and make it easy for a person to cough up. It has been an essential antidote for paracetamol poisoning.  The recommended dose of these supplements is about 200mg.

Diseases Due to Error in Metabolism

A large number of inborn errors of metabolism have been found in cysteine S containing amino acid. These are homocystinuria, cystathioninuria, and cystinosis (Cystinosis is a cysteine storage disease) and cystinuria.

Homocystinuria is due to deficiency of enzyme cystathionine beta-synthase and patient with this disease exhibits displacement of the lens, abnormalities in the skeleton, premature arterial diseases, osteoporosis and mental retardation.

In cystinuria large amount of cysteine is excreted in the urine along with lysine, arginine, and ornithine.