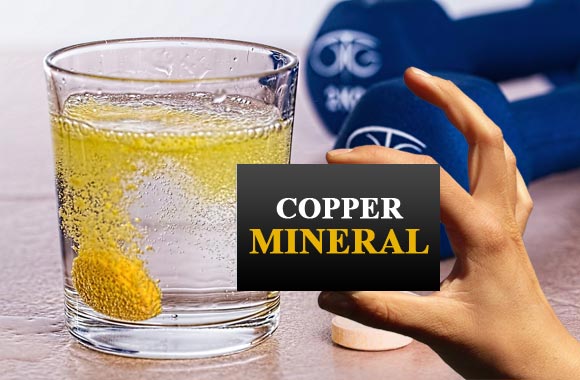 The amount of copper mineral in an adult body is estimated to be 100-150mg. It is a micronutrient which means it is needed in a small amount.

Copper is widely distributed in nature. Even poor diets provide enough copper for human needs. The liver is the richest source of copper having 4-5 percent of it. It is found in legumes, and in many other foods. Milk is however deficient of it. 10 percent of it is absorbed and the remaining passes out of the feces. The fecal copper includes a small part which is initially excreted in bile.

Copper is found in most foods so that a dietary deficiency of copper is almost impossible. Human beings liable to suffer from its deficiency include the infants fed an exclusive milk diet, those who have undergone intestinal bypass surgery, persons on parental nutrition and those who take an excessive amount of zinc. Its deficiency results in anemia, retardation of growth, degenerative changes in the aorta, elastin, mental deterioration and scurvy like changes in the skeleton. One of its best-documented abnormalities due to its deficiency is neutropenia.

Normally it does not lead to toxicity if it’s ingested in a large amount but there arise two diseases due to problems in its metabolism leading to the excess amount of copper in the body. These are

It is a rare disease which is caused by an autosomal recessive disorder that leads to an increased absorption of copper from the small intestine but a decrease biliary secretion. An excess of copper, therefore, is present in the in the liver, lenticular nucleus of the brain and the descement’s membrane of the cornea.

It is an X linked genetic disorder which is associated with the poor copper absorption. Its signs are kinky hair, failure to grow, mental deterioration and degenerative changes in the metaphysic of bones and in the elastin.